STARBURST is excited to present this exclusive look at the trailer for genre-busting British horror-gangster-comedy Polterheist before it heads to the British Independent Film Festival and has its wider release later in the year. We caught an early screening and found it hard-hitting, creepy and hilarious!

In this tale, two hapless small-time criminals kidnap a psychic medium, forcing her to contact the gangster they murdered to find his buried cash.

Racing against the clock with fear of reprisal from a psychotic gang boss, they accidentally unleash a demon hell-bent on revenge. The film is directed by David Gilbank and stars Jamie Cymbal, Sid Akbar Ali, Jo Mousely, and Pushpinder Chani. Check out the exclusive trailer reveal below.

Blending gangsters, supernatural horror and laced with dark humour, Polterheist is one of the most original British films of the year. Stay tuned for our full review closer to release.

Polterheist is showing at the British Independent Film Festival at Cineworld Leicester Square, London on Saturday, June 2nd. Book tickets https://www.filmfestivalguild.com/biff2018. The film is also nominated in several categories at the festival awards. Polterheist will be released in UK Cinemas and DVD in Autumn 2018 and has already been selected for several International film festivals. 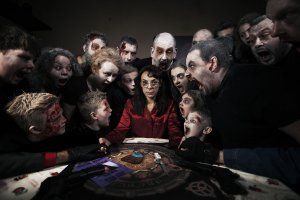