Fans of the 80's Dungeons and Dragons cartoon will be delighted to learn that classic characters Uni the Unicorn and Dungeon Master have made a triumphant return to the world of gaming. This time as new playable characters for the cult hit game, Idle Champions. His enemies, including Tiamat and Venger, will also turn up in various Adventure Variants.

Idle Champions of the Forgotten Realms is an officially-licensed Dungeons & Dragons strategy management video game uniting iconic characters from novels, campaigns, and shows into one epic adventure. It can play itself (it's an idle game), but it's more fun to actively manage the adventurers as they defeat various monsters.  Playable characters include Minsc and Boo,  Drizzt Do'Urden, Bruenor Battlehammer from R.A. Salvatore's Forgotten Realms novels, Celeste from the Neverwinter MMORPG.

In order to celebrate their 100th character,  Codename Entertainment, the people behind Idle Champions, have made Dungeon Master available for a limited time as part of an event called The Running.  This event starts from April 27th at 8PM BST and runs until May 9th. (If you miss the event, don't panic, he'll still be available to players via The Time Gates.)

You'll also be able to get a baby version of Uni as a familar in the game which will do some of the fighting for you. And a reskinned Dungeon Master in snazzy white 'Archmagi' robes can also be found.  Dungeon Master's special gear includes D&D books and the roller coaster car from the cartoon.

Out of all the classic D&D heroes, why Uni and Dungeon Master?

We've introduced characters from throughout the D&D Multiverse. We have characters from novels, video games, TRPG books, D&D Livestreams, and even a collection of our own unique character creations. With the 100th champion, we wanted to do something special, so why not a character from a cartoon?

For so many of us, Dungeon Master was our first introduction to the world of Dungeons and Dragons. We had multiple options, but for our 100th Champion, Dungeon Master (and Uni, who came along later during the design process) just felt perfect given our audience and our game's quirky style.

The D&D kids never made it home, will the Idle Champions? We've gone to the depths of Undermountain, we've delved into the nine hells, and we've cracked into an ancient glacier. There's always another adventure out there, and we're excited to continue the ride!

If we have it our way, Idle Champions will be questing through the Sword Coast (and beyond) for many years to come. We love our motley crew of Champions and we want to continue to bring exciting, quirky, and fun adventures to our players for as long as they are along for the ride with us.

100 is a big number, what's the next milestone?

Champion 101? Or maybe I should say Noipmahc 10! Seriously though. Along with the release of Dungeon Master, we’re releasing a fully localized version of the game; we're so excited to introduce Idle Champions to a wider audience! We've translated the game into Brazillian Portuguese, French, German, Latin American Spanish, and Simplified Chinese.

As we continue further into 2022, we're looking toward our next few Champions, some new systems that are in development for later this year, and our next interactive livestream adventure (Idle Champions Presents - Series 4) this fall! 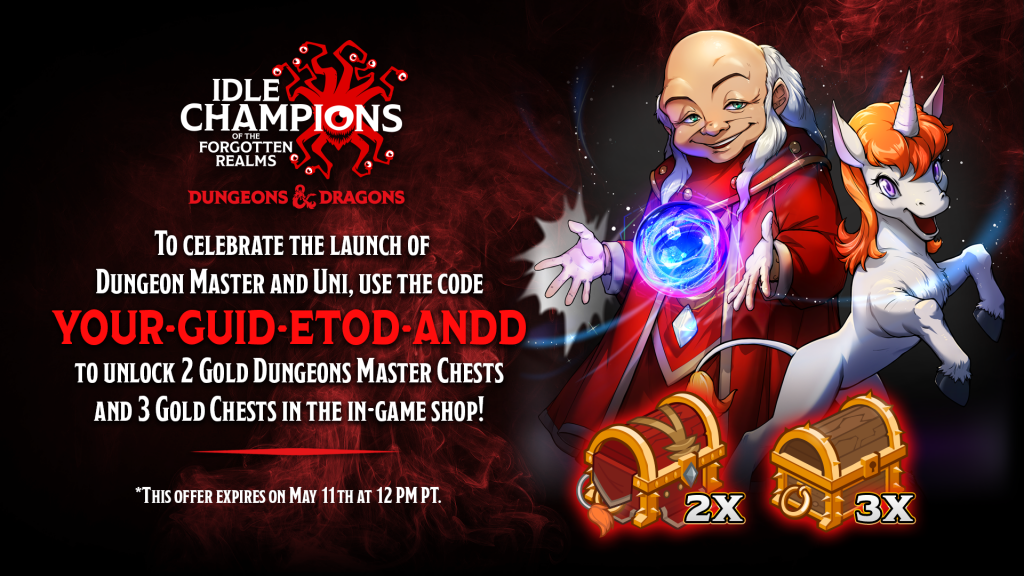 THE MORTUARY ASSISTANT Gets Live-Acti...

The video game was released less than a month ago.

Games Workshop have announced three ‘complete in the box’ introduction ...